According to the National Highway Traffic Safety Administration, 72% of the people who died in large truck crashes in 2017 were occupants of other vehicles. Occupants of large trucks made up 18% of the victims, and 10% were cyclists or pedestrians. This shows the importance of motorists, cyclists and pedestrians exercising extra vigilance on the road — part of which involves being aware of the most common causes of serious truck accidents and not needing to hire a New Jersey truck accident attorney.

Studies report varying percentages of truck drivers using illegal drugs. Some studies reported more than 25% of global participants admitting to being under the influence of drugs while driving. The numbers in the United States have been high enough in recent years that the Federal Motor Carrier Safety Administration recently required employee drivers to register with a national clearinghouse database. In the past, a driver may have been able to conceal a history of substance abuse easier. With the new clearinghouse, substance abuse information is available in a central place across states for employers. However, a recent report showed that 90% of job-seeking drivers had not yet registered with the clearinghouse.

In the United States, one of the biggest problems is prescription drugs. According to a report from CDL Knowledge, 26% of truck accidents were tied to prescription drug use. This was based on data provided by the IIHS and the FMCSA. The growing use of medical marijuana is also a problem. The Department of Transportation has issued a reminder to employee truck drivers and all other large vehicle drivers that medical marijuana use is not an excuse for testing positive for marijuana in its required drug testing system. Other private companies maintain similar policies and do not make exceptions for medical marijuana when it comes to transportation jobs. Illegal drugs were only cited as a cause in 3% of the accidents in the CDL Knowledge report.

According to the same CDL Knowledge report, speed was to blame for about 23% of large truck accidents. One of the factors that often causes a crash with speeding is the inability of trucks to stop quickly. This is especially true when trucks are fully loaded or going downhill. Their brakes are designed differently than a standard vehicle’s brakes. If a large truck is going over the speed limit and approaching a car, it may not be able to brake in time to avoid rear-ending the car if it cannot merge into another lane. Some speeding accidents also happen in intersections if a semi cannot slow down in time to avoid going into an intersection when there is a red light. 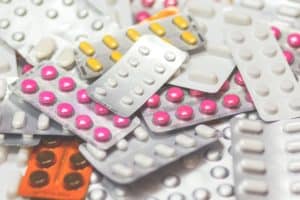 While prescription drugs usually have more profound effects, some over-the-counter substances can also significantly impair a driver. For example, some allergy, flu and cough medicines contain substances that cause drowsiness. If a person takes too much of such a substance, it is harder to stay alert and react to other drivers’ actions. According to the CDL Knowledge report, the use of OTC drugs was present in 17% of truck accidents.

Fatigue is often cited as one of the most common causes behind truck crashes. In many cases, fatigue may be a contributing factor in crashes where illegal drugs, prescription drugs, alcohol or OTC drugs are the main cause. However, fatigue by itself is also dangerous for truck drivers. Falling asleep or losing alertness for even a few seconds can lead to a deadly crash. Fatigue was cited as a cause in 13% of the accidents surveyed in the CDL Knowledge report. Drivers can suffer from fatigue for a variety of reasons, and there are usually multiple factors involved. Long hours, lack of quality sleep, irregular sleeping habits, poor diet, lack of exercise, strenuous activity and stress are a few contributing factors to fatigue. Safety advocates are concerned about the number of fatigue-related accidents rising in the future after the likely hours of service changes. The changes are not yet set. However, the flexible hours of service changes were submitted to the White House in March 2020 and are still waiting for final approval.

The CDL Knowledge report found that alcohol was to blame for 8% of truck accidents. Alcohol-related accidents often involve truckers veering into oncoming vehicles or vehicles that are traveling in the same direction in neighboring lanes. To strongly discourage intoxicated driving, truck drivers face some harsh legal penalties for drinking while intoxicated. This is true whether they are in their own car or driving a truck while on duty. For example, a truck driver who has the weekend off may decide to go to the bar with some friends. If the truck driver is driving a personal car after leaving work, they could face suspension of their CDL for at least a year if they are pulled over and found to be driving while intoxicated. Additional offenses come with stricter penalties.

It may be nearly impossible to determine if a truck driver who is driving dangerously is on drugs, fatigued, drunk or distracted. Whenever you see a truck driver who is driving dangerously, call 911. If someone is in the car with you and can make the call, it is safer to have that person do it while you focus on the road. Slow down or pull over for your own safety when calling, and try to remember the license plate number. If you cannot do that, try to note the color of the truck, any logos or the state of the license plate. This will help you give a more accurate description of the truck to law enforcement. These are some other safety tips to help you reduce the chances of being in an accident:

After an Accident Call a New Jersey Truck Accident Attorney

Not all large truck crashes can be avoided with the above safety guidelines. If you are in an accident, call the police to the scene if you can. Take photos of the scene if you are able. Notify your insurance agent of the accident, and call a truck accident lawyer immediately after that. You may be entitled to compensation for any temporary or long-term injuries.

At Rebenack Aronow & Mascolo, we can help you determine what type of legal action may be necessary. Please contact us at 732-247-3600 for a free consultation with a New Jersey truck accident lawyer. You can also stop by one of our offices. We are at 111 Livingston Avenue in New Brunswick, 21 North Bridge Street in Somerville or 31 West Main Street in Freehold.