One of the top 10 causes of truck accidents is improperly loaded cargo. Trucks that were loaded improperly are a danger to occupants of other vehicles that are sharing the road with them. That is because when the cargo falls off these trucks, it leads to devastating consequences for those around them.

The number of truck accidents caused by improperly loaded cargo only amounts to 4% of the total, but even though this seems like a very low number, it is still one of the top 10 causes of truck accidents. In addition to that, the percentage of risk that other people have of being injured in this type of collision is equal to 56.3%, according to the Federal Motor Carrier Safety Administration.

There is a high risk of danger with improper loading because it can cause the items to fall off the truck. When this occurs, they can crash into other motor vehicles or even pedestrians on the street. The damage could be highly significant. Depending upon the item, it could be heavy enough to break the glass in a smaller motor vehicle or dent the metal, but people can also be seriously injured. 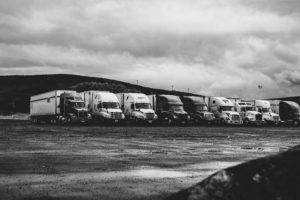 If you have been involved in a truck accident, you might want to meet with a trucking accident attorney. The most important reason is that the injuries truck accidents inflict may be catastrophic, and you need as much money as you can possibly obtain to help you recover. There’s a possibility that you may spend several weeks, or even months, in the hospital, and your medical bills would not end after you are released.

Because it is more difficult to represent yourself after a truck accident, you need someone who has experience with fighting with the insurance companies and the trucking carriers as well. With trucking accidents, more than one person can be held liable for your injuries, but your attorney must determine which of the parties involved in this matter to target. Your trucking accident attorney could choose to file claims against several people, including:

Your attorney may be able to file multiple claims against several people to maximize the amount of money that you could receive.

When the Loader Is at Fault

In 2004, the FMCSA developed specific rules for trucks that will be carrying cargo on the roads and highways. These are known as “cargo securement rules,” and they state that loads must be secured with shoring bars, tie-downs or another object that is equally as strong as those previously mentioned objects. They are required to use the number of tie-downs that are needed to secure the load for its entire width and length. Failure to perform these duties correctly can result in:

There may have been a defect in any of the components of the parts that were used to build the truck. If this is the case, either the manufacturer of the part or its distributor may be assigned a portion of the responsibility for the collision.

The fact that some of the parts have defects may also be the reason that cargo falls off a truck. The driver may have secured the load according to the rules described above. Then the manufacturer of the faulty part will be held responsible for the collision. The company that oversees securing the cargo may also have missed a defect on the truck. Anything missed during an inspection may cause the cargo company to receive a portion of the blame for the collision.

Truck drivers can be negligent for several reasons. Many truck accidents have been the result of driver fatigue, and this can cause:

The truck driver is not necessarily employed by a large company, so this is a time when you will definitely need the help of a trucking accident lawyer. You must demonstrate which party should bear the blame for your collision, and your attorney has the experience to do this. Then you can decide the best way that you can proceed.

Liability in a truck accident is more difficult to prove than other types of collisions, so you need a lawyer with experience handling these complicated matters. Our attorneys do, and they are prepared to fight for you today. If you or a loved one were hurt in a collision with a truck, contact Rebenack, Aronow and Mascolo in New Brunswick or Somerville at (732) 394-1549 today.