Trucking Maneuvers That Create a High Risk of Collision

New Jersey state police have reported more than 90 fatalities throughout the state in 2020 as a result of collisions involving tractor trailers. Semi-truck drivers undergo intense training and operate their vehicles according to stringent protocol as well as state traffic laws and safety regulations. However, errors may occur that cause collisions resulting in catastrophic injury to those involved, and it is important to know where to seek support if a person is involved in a motor vehicle accident involving a commercial truck.

A Licensed Tractor-trailer Driver Is Prohibited From Making These Maneuvers

The average tractor-trailer weighs approximately 30,000 pounds or more, without including the weight of hauled materials. Because of the massive size of such vehicles and potential damage that may occur in a collision, truck drivers are prohibited from executing the following maneuvers:

A multi-vehicle collision could occur when a truck driver executes a prohibited maneuver. This is especially true in cases where there is a lot of traffic and where vehicles traveling behind are unable to stop in time. If a truck is carrying a full load and is traveling at highway speeds of approximately 65 miles per hour, it will need at least 520 or more feet to come to a complete stop.

Big Rigs Are Not Allowed on Neighborhood Streets

Semi-truck drivers are restricted regarding the areas in which they may travel. One of the places they are prohibited from accessing is small roads in residential areas. Safe passage of a big truck through a neighborhood with smaller roads would not only be difficult but is often nearly impossible. Truck drivers must plan their routes to avoid restricted areas. There is often a lot of activity happening in these areas, from other vehicles pulling in and out of driveways to children playing on sidewalks, people walking their dogs and more, which can be problematic to a truck driver trying to maneuver their way through the streets.

There are also often bicyclists and other pedestrians on residential roadways. This is another reason why there are regulations in place that prohibit big trucks from accessing such areas. If a truck driver winds up on a residential roadway by mistake, it might not only place the driver at risk but any other motorist or pedestrian who happens to be in the vicinity as well. 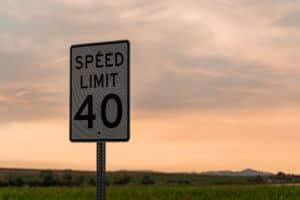 The larger and heavier a vehicle is, the more space a driver needs to create between their vehicle and the vehicle in front of it in order to be able to come to a full stop when necessary. Driving above a posted speed limit is an illegal driving maneuver that often is a factor in collisions.

Many truck drivers travel a bit faster when approaching a downward grade on a highway in order to pick up speed to make it up a big hill. This strategy is not necessarily a traffic violation as long as the driver does not exceed the posted speed limit. In addition to the dangers of traveling too closely behind another vehicle, speeding increases the chances of a crash because it’s less likely that a truck driver will be able to stop in time if a sudden need arises.

Most States Have Laws Against Texting and Driving

Distracted driving laws in New Jersey prohibit texting behind the wheel. In fact, using a cellphone to make a phone call while driving is also illegal in this state. A cellphone may be used in a hands-free mode under certain restrictions. When a person suffers injury because of a distracted truck driver, a trucking accident attorney can file a personal injury claim or wrongful death claim on behalf of a recovering victim or immediate family member of a decedent.

Some sections of roadway, such as intersections, are inherently dangerous areas. Even when a crossroad is secured with signage or traffic lights, a truck driver must be alert and especially cautious when they are planning on making a turn. Because of their massive size, it is not uncommon for truck drivers to “swing it wide” when making a right turn. However, this often causes them to veer into the left lane.

If a truck makes a right-hand turn from a left lane position, there is a great risk that a crash might occur. If a driver in a car attempts to zoom past the truck before it has completed its turn, it is a recipe for disaster. Such circumstances are also dangerous for pedestrians or cyclists who happen to be nearby and waiting to cross the road. If someone enters the crossroad before a truck has completed a turn, serious injury may result.

Vehicles Often Get Lost in a Truck’s Blind Spots

Making sure one has proper visibility before changing lanes is a basic safety precaution. Big rig operators understand that smaller vehicles may not be visible to them if they are approaching alongside in an adjacent lane. It is imperative that a truck driver makes sure that they have plenty of room to navigate a lane change before attempting the maneuver.

A truck driver who makes safety a priority typically engages a turn signal at least 6 to 8 seconds before they begin to maneuver a lane change. It’s also imperative that a truck driver keeps the vehicle’s mirrors clear of visual obstruction from dirt or slush and that the mirrors are properly adjusted to optimize visibility. Failing to take the appropriate safety precautions before moving left or right increases the risk that a sudden collision might occur.

Serious Injuries May Occur if a Trucker Makes Unsafe Maneuvers

Every motorist is obligated to adhere to all traffic laws and safety regulations each time they get behind the wheel of a vehicle. When that vehicle is a 30,000-pound truck, there is a great chance that serious, even life-threatening, injuries may occur if the truck driver collides with another vehicle or hits a pedestrian.

While any number of issues, such as poor road conditions or inclement weather, can present road hazards that increase the chances of a truck accident, many past cases were later determined to have been caused by unsafe driving maneuvers.

Recovering From a Truck Accident

When a big rig collides with a car, the results are often catastrophic. The recovery may be long and arduous for someone who has survived their injuries. In the immediate aftermath of a crash, the top priority is always to obtain medical attention. It is also important to closely monitor one’s condition in the days and weeks that follow an accident because not all injuries are immediately apparent.

If you or your loved one have suffered an injury as a result of a New Jersey trucking accident and you believe that an illegal truck maneuver was a causal factor, you can schedule a consultation with a trucking accident attorney to discuss filing a claim. Rebenack, Aronow & Mascolo, L.L.P. at (732) 394-1549, in Somerville, is committed to providing strong support to recovering accident victims and families of fatally injured accident victims. Call today so that we can discuss your case.