According to the Federal Motor Carrier Safety Administration, there was a 9% increase in fatal large truck crashes between 2016 and 2017. The 2017 total of 4,889 fatal bus, large truck and semi-trailer accidents was a 42% increase from the decade low in 2009. With the rising rate of truck accidents, it’s important to understand the risks and how to minimize them.

In some reports, these accidents may also be called passenger compartment intrusions. They occur when a vehicle goes under a semi-trailer. Since semi-trailers stand high off the ground, some smaller vehicles may lodge under them upon impact. Although federal regulations require semi-trailers to have rear impact guards, the sides of the trailers are not required to be outfitted with them.

A rear impact guard reduces the impact and can help keep most vehicles from lodging under a trailer in a rear crash. However, a car that crashes into the side of a semi-trailer may not be as lucky. The average number of annual fatalities from this type of crash in the United States is more than 200. Federal safety regulators believe that the number may be higher due to poor understanding and under-reporting of this specific crash category. Although underride accidents may occur at intersections, some happen when semi-trailers swerve and vehicles crash into them.

Rear crashes often happen when drivers are too close to semi-trailers or when semi drivers are tailing cars. Although the importance of rear guards was highlighted in the previous section, federal safety engineers have found that not all rear guards are adequate. Some may be rusty, loose or in poor condition. This means that the risk of lodging under a trailer upon rear impact exists despite the federal requirement of rear impact guards.

It’s vital to understand the difference between a semi’s air brakes and a car’s hydraulic brakes. When a car brakes at 65 mph, it may only take a few seconds to come to a complete stop. However, a semi-trailer that is fully loaded requires a distance of about two football fields to come to a complete stop at that speed. The air brakes must build up pressure to stop the semi. This creates a delay. If a semi driver does not maintain the vehicle’s brakes, there may be total brake failure on the road. This means that it’s easy for a semi to hit a car that brakes suddenly on a highway or during a slow-moving traffic jam.

Cargo trailers and liquid tank trailers have high gravity centers. If the load in a cargo trailer or liquid tank shifts, the imbalance can cause it to move. Rollovers often happen when semi-trailers make sudden moves or swerve off the road. Unfortunately, vehicles may crash into them or be alongside them when they sway. Rollovers can also happen with empty trailers. When an empty trailer rolls, it’s usually due to swaying or strong wind gusts. In New Jersey and New York, there are many bridges that semis are not supposed to use during wind advisories. However, many truckers have used them anyway and have caused serious accidents. 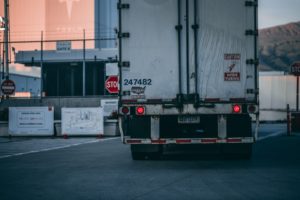 To better understand the risks of this type of accident, imagine someone driving with a backseat full of groceries. When the driver swerves or makes a fast turn, the grocery bags may slide or tip over. The same is true with cargo loads in truck trailers. Boxes or crates may tip and shift. In a tanker, the liquid sloshes to one side with great impact. However, the impact of shifting cargo or liquid is much more powerful than groceries, which is why rollovers can occur with partially loaded semi-trailers and tankers. According to safety regulators, nearly 90% of tanker rollovers occur with partially loaded tanks. If they are not fully loaded, there is more risk for the load to shift. Since other drivers have no way of knowing if a tank or trailer is empty, partially loaded or fully loaded, they must always be vigilant. Speed is also a contributor in nearly half of all semi rollover accidents.

This category includes driving under the influence, distracted driving, drowsy driving, speeding and other poor driving choices. In most accidents, one of these factors is a contributor to the cause of the crash. For example, a sleepy driver may swerve off the road suddenly on a windy day, and this action might lead to a rollover crash. In another example, a distracted semi driver may run a red light. If a car is going through that intersection and does not see the semi in time, the driver could hit the side of the trailer and be seriously injured. Although there are laws and rules in place for commercial drivers, federal regulators are trying to relax some of the driving hour limitations. This could increase the risk of drowsy driving among truckers.

How to Reduce the Risk of Truck Accidents

Since drivers must share most roads with semi-trailers, there will always be risks. However, those risks can be reduced with extra caution on the road. Drivers of cars and other smaller vehicles should follow these tips:

After an Accident: What to Do

If you or a loved one were in a serious accident that involved a semi-trailer recently, you may be awarded compensation for your injuries. When semi drivers cause serious or fatal truck crashes, they must usually compensate the victims. If a loved one was killed, you may need money for funeral expenses or lost income. At RAM Law, our New Jersey truck accidents attorneys know how to help you determine if you are entitled to compensation.

We’ll handle all the communications, paperwork, legal documents and everything else that you shouldn’t have to worry about at such a difficult time. Our attorneys can have doctors assess and determine the extent of your injuries. Some crash victims need lifelong care, medical equipment or other accommodations for permanent injuries. Since trucking collisions usually result in severe injuries, a plaintiff should have a good truck accident lawyer fight for a fair settlement instead of accepting a direct offer without legal representation. Please call us today for a free consultation with a New Jersey truck accident lawyer. You can reach our New Brunswick office at (732) 247-3600 and our Somerville office at (908) 448-2560.