Garbage Trucks and the Dangers Faced on the Road

Why is trash collection dangerous? According to the Solid Waste Association of North America (SWANA), the sheer number of deaths and serious injuries annually make sanitation work one of the most dangerous civilian jobs in the United States. Many trucking accident attorneys and other industry experts have long argued for greater oversight of commercial waste collection to protect trash collectors but also drivers, pedestrians and cyclists on the road. The reason waste collection is so dangerous is that these men and women are often working before sunrise and performing their jobs on roads where there is oncoming traffic.

Waste collection is an essential service. Even the smallest community cannot do without it for long before serious health issues arise. Many trash collectors and recyclers have been required to work longer and harder during the pandemic due to spikes in residential trash accumulation. The Centers for Disease Control and Prevention (CDC) has even published an advisory specifically for waste collectors and recyclers. Trash collection was already a dangerous job, and the pandemic has made it more so. It also presents a greater risk to others on the road due to garbage trucks running at unusual times and for longer periods.

Why is Collecting Trash Dangerous?

Many people do not think of waste collection and recycling as a dangerous profession, but according to SWANA and the Occupational Safety and Health Administration (OSHA), it very much is. In fact, it ranks fifth in fatalities among all U.S. civilian jobs. Garbage collection is often performed while it is still dark to avoid other traffic. While that can circumvent most traffic-related incidents, it can make the ones that do occur more dangerous. Garbage trucks often have to operate on the side of the road and in lanes with oncoming traffic and sometimes need to break certain traffic regulations to get the job done. Another issue is that these trucks frequently stop and go, and some of the employees actually ride outside the vehicles.

Why is Trash Collection Dangerous: Garbage Trucks Are Exempt From Certain Driving Laws

Did you know that there are different rules of the road for garbage trucks? Due to the nature of their jobs, certain exemptions enable them to break road rules that generally apply to most vehicles. This is a potential road danger since a garbage truck will sometimes perform actions that other drivers in the vicinity do not expect. Be aware that a garbage truck must have its front and rear hazard lights on while in the process of waste collection. This lets you know that the driver may behave in an unexpected manner, such as driving in the “wrong” direction. If a garbage truck does not have its hazards on, then it must behave in the same manner as any other commercial truck. 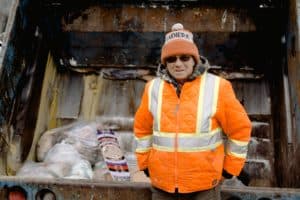 Move Over. It’s the Law.

Due to efforts by the U.S. Department of Transportation (DOT), there is now a move-over law in all 50 states. DOT even has an ongoing safety campaign: “Move Over. It’s the Law.” Much of the emphasis of this campaign has been on law enforcement and ambulances, and many people associate it with traffic stops, auto accidents and vehicles broken down on the side of the road. But many states have expanded their laws to cover waste collectors and recyclers as well. This means two things for other drivers. If a garbage truck has its hazards on, you must give it the right of way, and if it is stopped or moving slowly, either in a lane or on the side of the road, then you are required to move over at least one lane to the left. It is worth noting that many of the deaths and injuries in this profession are due to oncoming traffic either colliding with the garbage truck itself or the workers outside of it doing their jobs.

Recent law changes have raised the safety requirements for all garbage trucks that were purchased after 2010. Hazard lights must meet certain requirements. The vehicles must have a back-up alarm along with front- and rear-facing cameras. In New Jersey, however, it is not a legal requirement that garbage trucks have a side as opposed to a rear loader. Some states have made this a requirement, and SWANA, OSHA, trucking accident attorneys and many other industry experts have long argued that rear loaders put waste collectors at unnecessary risk because it requires them to stand out on the road rather than on the sidewalk.

Riding Outside the Cab

Another danger of being a trash collector is having to ride outside the vehicle by standing on a riding step and holding on to a riding grip. This is much faster than getting in and out of the cab but also more dangerous. The American National Standards Institute (ANSI) maintains standards for when trash collectors should use the riding step and when they should be in the cab instead. However, OSHA does not actively enforce these standards, and many workers are under great pressure to complete their routes by a certain time.

The Challenges of Operating an Oversized Vehicle

Operating a garbage truck is not easy. These are large vehicles, and sightlines are often obstructed. In addition, these trucks are often operated in residential areas on roads that were not designed to facilitate oversized commercial vehicles. More than 3 percent of all garbage truck-related accidents involve a rollover, and garbage trucks cause a significant amount of property damage each year due to driver error, malfunctioning brakes and other factors. There are also more than 2,000 accidents between garbage trucks and other vehicles each year, and while this varies on an annual basis, fault can be attributed to the garbage truck operator in about only 30 percent of all cases.

Why is Trash Collection Dangerous: Overworking

Driver fatigue is among the leading causes of motor vehicle accidents involving commercial trucks. In the world of waste collection, there was a notable recent Tri-State area case in which investigative journalists caught garbage truck operators in major cities falling asleep on the job due to exhaustion. Waste collectors work long, hard hours and often have to put in required overtime. The hours-of-service (HOS) regulations set forth by the FMCSA do apply to the waste collection industry. However, there are exemptions afforded these companies due to their employees usually operating close to their home bases. In addition, there are fewer opportunities to identify HOS violations because these electronic logs are not maintained, inspected and audited in the same manner as with most commercial trucks.

Get the Local Legal Representation You Need

Rebenack, Aronow & Mascolo, LLP, is a trial and litigation firm focused on personal injury cases. We have represented many clients who have suffered damages in commercial truck-related crashes. Whether you are a civilian who was hurt in an accident involving a garbage truck, or you are a professional waste collector who was injured in an accident while working, RAM Law wants to help. Schedule a consultation with one of our trucking accident attorneys today. You can reach our New Jersey offices in New Brunswick and Sommerville at (732) 394-1549 or by contacting us online.